Pizza as a Science 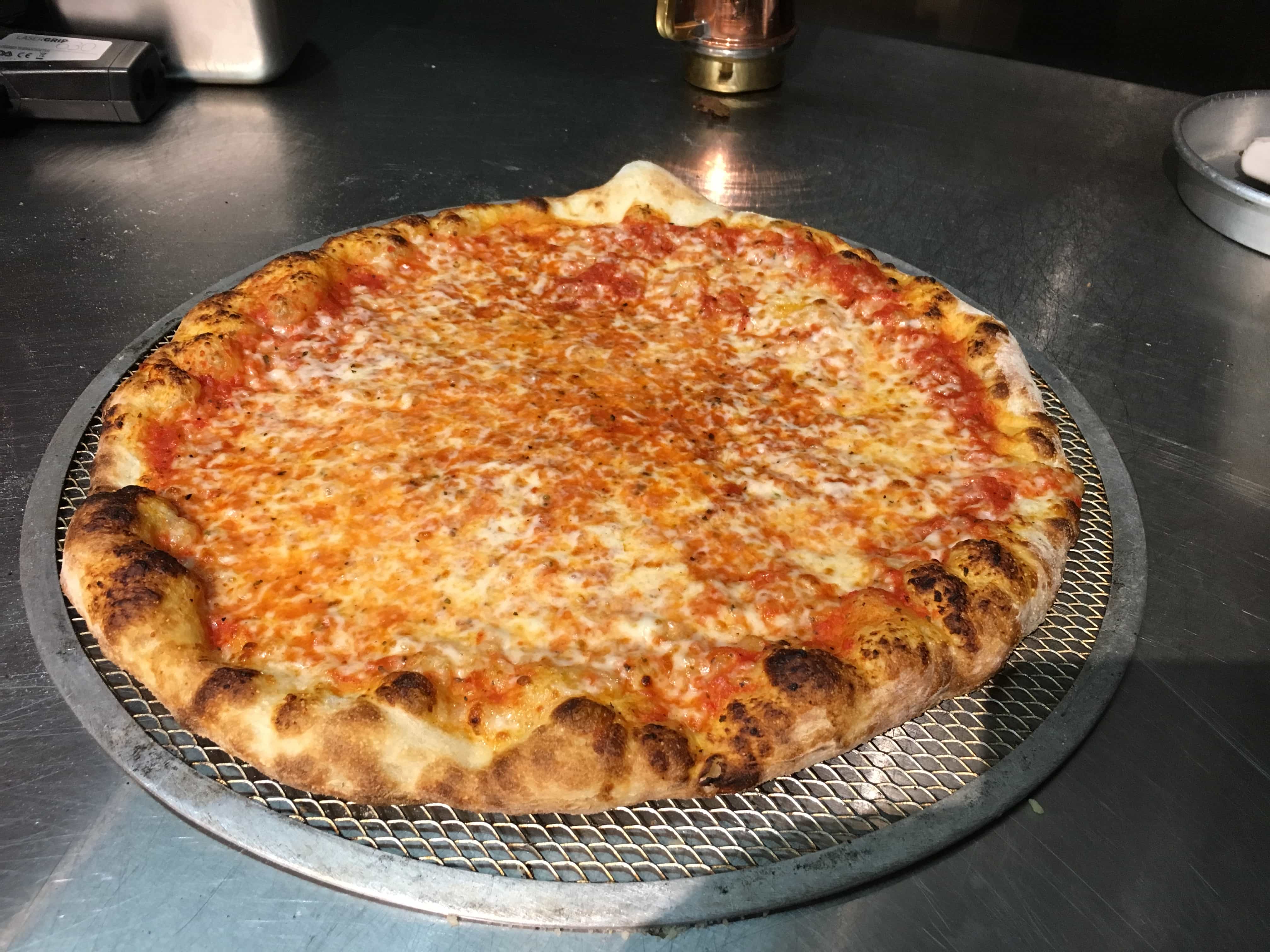 Gone are the days of stereotypical guidos making pizza in white t-shirts. When companies like Chipotle start backing pizzerias, there is far more thought and science going into the processes than you would believe. Having only been in the game a short time, I have quickly learned that just about any heat source will cook a pizza, but to cook it well, you have to understand the physics behind thermal transfer, how weight affects cook times and characteristics, how sugars affect the browning of your crust and how that relates to limitations in temperatures, how to use a brick oven and where the pizza should be placed based on temperature gradients in the brick floor, etc., etc.  In short, the people who are truly knowledgeable have left no stone unturned in becoming so. I am quickly becoming one of those people. It’s in my DNA. Here are my observations:

There was a time when every pizzeria had similar deck ovens, be it a Baker’s Pride, Blodgett, Peerless, etc. Today, there are probably 100 pizza oven manufacturers competing in the space. Italian and American oven manufacturers have begun offering traditional looking wood-fired brick ovens with rotating floors. The kicker is they aren’t wood fired! Most are electric or gas but have the same finish as wood or coal-fired. This rotating floor takes away the skill requirement of being able to rotate pies in a brick oven.

It simply goes around one complete turn and when it reappears, needs to be removed. Contrast this with the skill needed to read the dough’s readiness to be turned, understand the difference between blistering and burned and most importantly: being able to read the little whisps of smoke that speak to blistering on a wood/coal-fired pizza that tells you it’s time to rotate. What this does – in addition to removing the skill requirement – is allow for a lower level employee to run the oven. Is it bad? Yes and no. Yes, because anyone can scoop a finished pizza from an oven and there goes another skill lost to technology. No, because a typical barrier to artisan pizza is the dexterity required to run a real brick oven. Move the pizza too early and it’s trash, move it too late and it’s burned. That’s a skill, like glass blowing. These ovens are in the $20k plus range and weigh 4-6000 lbs.

Rotating deck ovens are only one type of pizza oven that are changing the game. There is much more science in some of the electric ovens out today. Companies like PizzaMaster have very sophisticated controls over the decks. I have seen proprietary stones, decks made out of lava rock, etc. Embedded in the stones are heating elements. The coldest area of a traditional pizza oven or brick oven is the area in front of the door. In these electric ovens, the door area is kept hotter than the rest of the oven to compensate for the opening and closing. Try that with your wood-fired brick oven. These ovens are even more expensive and require 3-phase power to run them. I just looked into adding this option and the electric company wants $15 grand to run it to the pole. From the pole to the building is my problem and likely another $4 grand.

A third class of ovens which are changing the game are small footprint, ventless ovens made by companies like Turbo Chef. Turbo Chef makes a little oven called the “Fire”.

It heats to 842 degrees, has convection top and bottom and separate heating elements and digital controls. It costs just under $5 grand. For a single pizza oven limited to 14″. It cooks a pizza in 2 minutes flat. No bull. Two minutes! Compare this with the traditional 6-7 minutes in a deck oven and you have an ace in the hole. In 6 minutes, this oven will put three pizzas on your customers tables without the requirement of a hood. That means you could put one in an office building and make pizza for lunch. Game changing technology and the science of convection coupled with high heat.

Having multiple ovens has really helped us increase output. This wouldn’t have been possible without an increased understanding which can only be gained through experience and the willingness to break from convention. It has allowed us to put a serious number of pizzas out using each of the tools when and where necessary. We currently have 4 ovens, each running at a different temperature.

The brick oven is obscenely hot but due to it’s large deck, allows us to even cook calzones in there by putting them further from the fire. Each successive year has brought challenges to Antonio’s due to growth and part of the solution has been in oven technology. Going to the Pizza Expo has exposed me to solutions I would never have known to be available. Plus, the guys who designed the ovens are standing there and will answer any questions you have. This is invaluable. Anyone who isn’t going, is standing still and will be passed by those who attend – and more importantly – adapt to the changing environment. Pizza is serious business people!

About 8 months ago, I began investigating how thermal heat transfer affects pizza. It’s crystal clear to me now that different materials transfer heat and absorb it, at far different rates. Understanding these rates will help you choose materials that will increase throughput without sacrifice. All come at a cost. A few months back, the universe sent in a geothermal physicist who, after enjoying a pizza, helped me understand how to use steel or aluminum/steel cooking surface and explained that steel will be cooler than the surrounding air because of how fast it transfers heat. This led me to cook pizza on one to see the difference. It really worked! The transfer of energy is so fast that the steel mimics a wood-fired deck that is much hotter. If you shave a minute off every pizza and lose nothing in finished product, you are seeing a huge increase in productivity. To help me understand, the physicist offered this analogy: touch a hot brick on a summer’s day and you can have a second or two before it transfers enough heat to burn you. Try that with a black car’s hood in the sun. Near instant burn. Suddenly, I was looking up heat transfer rates of various metals and thinking why doesn’t someone make ferro-cement decks. I’m probably too early on this idea. To compare surfaces, I tried ceramic, aluminum, steel/aluminum and cordierite. Each had its own sweet spot and we could run the cordierite at a much higher temp than the aluminum because of the transfer rate differences. Cordierite transferred heat slower which led to a crisper bottom. Aluminum mimicked a wood-fired oven in look and feel but at a lower temperature. Steel is a beast! Ceramic has a nice cook but we shattered it too easily. There is another stone made of the same brick in a Kiln which I would like to try. I feel like we are in science lab at times and love it.

Another bottleneck area in a pizzeria – prep tables – has been addressed with technology. Randell makes a Dual Rail pizza prep table that effectively doubles the number of topping pans available to your pizza makers. Instead of 9 maximum in a 72″ table, there are 18 pans worth of toppings. No more opening and reaching into a drawer or pans falling out onto the floor. Technology in this piece is awesome as well. Temperature controls for each rail, plus a separate control for the area underneath. Two drains built in that actually work. $9 grand worth of technology that allows multiple pizza makers to put together pies quickly without shuffling continually. Priceless. We run the system with the controls set on 3 out of 10. That’s how powerful it is. The emerging pattern you are seeing is that technology is not cheap, yet these technologies create efficiencies that were previously impossible.

Dough and Sauce – nothing but chemical formulas

The top-secret recipes that every pizzeria thinks is the best(us included) are nothing more than chemical formulas. Add sugar, the sauce is sweeter. Add aunt Gianna’s basil and the sauce is smoother.  Most people don’t realize how much trial and error goes into sauce. Underlying it all is science. Some people cook their sauce to stop the breakdown of naturally occurring proteins which can ruin a sauce. For example, powdered garlic is stable whereas diced fresh garlic is continually decomposing as it ages. The latter sauce has a much shorter lifespan but tastes better. Sealed cans alleviate some of this but not many of us have an actual cannery…

Dough is actually a living organism whose lifespan is determined by many factors, including:

Everything you do in a restaurant involves a scientific process. From how you answer the phone, how you transmit the order – on paper or a computer screen, how you time your orders, deliveries, track drivers, prioritize dine-in customers, how you prep vegetables based on seasonality, even how your people wash dishes- everything is a process. People who do not continually hone their processes are bound to stagnate or fail. You must continue to improve or be passed by competitors. We have only been open 2.5 years and have gone through mad changes. Changes that pissed off employees but resulted in a much better way of doing things. Your goal as owner and chief bottle washer is to streamline every process for your employees. If you leave it to employee whim, there is no chance at consistency. There are many ways to do everything. Don’t worry about everyone else, just make it better one step at a time. If you don’t have that knowledge or are having trouble with a process, ask another business owner. I personally know nothing about franchising, but when approached by three different groups of investors, had to reach out to someone who did and chose to pass. If you don’t know how to schedule prep or dough and keep throwing out too much, ask someone who does. I remember the day we had 35 orders up and the ticket holder couldn’t actually hold that many. We added another. Imagine scanning 35 receipts trying to find the right one. At that moment, I began searching for kitchen display screens and a program to print to them. We started with one screen that was too small. Added a second. Now we have 4 and send off orders to the station that should receive them. The science of change.

Connections are pure science that we don’t understand

Connections define people. Those with long-term connections that are strong tend to facilitate them easily. As a believer in Einstein’s “String Theory” I believe we are all connected with some connections much stronger than others. This is what brings people together. The value of great mentors is immeasurable for they provide the wisdom that only experience can offer. Finding them is the hard part. The pizza industry as a whole is far more nurturing than any industry I’ve previously been involved with. The ability to bounce ideas off people with 20-50 years of experience is simply incredible. Guys like Tony Gemignani, Tom Lehman and Chef Chris Gonzalez have listened to my crazy ideas and offered advice or guidance. At the 2017 pizza Expo, I spoke with Glenn Cybulski who offered: if you need anything or have a question, call me. The idea that someone who has sacrificed and invested years in honing their craft will share that knowledge is a solid indicator that I’m with the right people for I constantly share knowledge. I will be one of these guys in time and don’t take their kindness for granted. Thank you, Gentlemen. Had I not attended the Pizza Expo in 2015, 2016 and 2017, I would not know Tony, Glenn or Tom. Leave no stone unturned in your quest to create memorable pizzas for your customers or family. And remember, pizza is actually a science, not “just a pizza”.